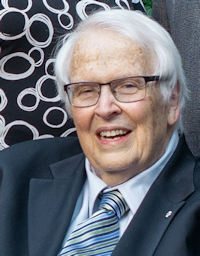 The Mach-Gaensslen Foundation of Canada has lost its former counsel and a good friend with the passing of David Hill, C.M., Q.C., LLB, on November 18, 2022.

Hill, a prominent Ottawa lawyer and one of the co-founders of law firm Perley-Robertson, Hill & McDougall LLP, was a long-serving advisor to the foundation, contributing to its success in many ways beyond providing legal advice. Although he had retired as legal counsel, he was an honorary director of the foundation until his death.

Hill helped build his law firm from the original four founding partners to a major national and international firm with more than 60 lawyers. He was made Queen’s Counsel in 1982. But he is just as well known for his volunteer work as a director or officer of many organizations. Among these are the Canadian Cancer Society (national board of directors 1983–1989), the Ottawa Civic Hospital (board of trustees 1975–1983) and the Ottawa Civic Hospital Foundation (board of directors, 1987–2000). Among his many awards and accolades, these community roles garnered him a membership in the Order of Canada. He  was an honorary life member of the Canadian Cancer  Society and of the Canadian Association of Chiefs of Police.

Most recently, Hill was a member of the board of directors of the Help Our Students Program, which helps Ottawa students stay in and graduate from secondary school.